On January 6, 2002, a previously unknown red variable star in the constellation Monoceros, now known as V838 Monocerotis,  experienced a major outburst. The star, about 20,000 light years away, brightened to about a million times the luminosity of the Sun; at the time of maximum it was one of the most luminous stars in the Milky Way galaxy. The brightening was accompanied by the rapid expansion of the outer layers of the star. For a short time following the outburst, V838 Mon probably had one of the largest diameters of any known star.

Originally thought to be a typical nova eruption, it was soon realized that it was something completely different. The reason for the outburst is still uncertain, but a number of hypotheses have been put forward, including an eruption related to stellar death processes or a merger with a companion star or planet.

The remnant is evolving rapidly. As of 2009 it had increased in both temperature and luminosity but decreased in radius; the ejecta continues to expand.

A light echo is a phenomenon often observed when an object undergoes a relatively short duration, very luminous eruption. Analogous to an echo of sound, a light echo is produced when a sudden flash or burst of light is reflected off of interstellar matter, sometimes dust and gas produced by the erupting object itself. These echos. taking a longer path and arriving later than the light from the initial event, produces a vision of expanding rings around the site of the outburst. 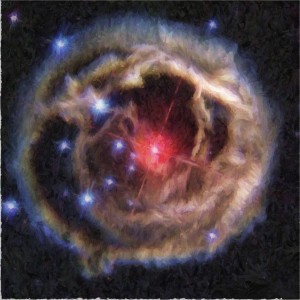 This is a digital painting of V838 Mon that  I just finished; it it based on an image taken by the Hubble Space Telescope on December 17, 2002.

So Fred and I are sitting at our table, waiting on our lunch, and talking about an upcoming event at Jefferson Lab when we’re interrupted from the next table.

“Excuse me but you’re wrong.”

“Wrong? About what? The universe being more than 6000 years old?”

“Well, yes, that obviously, but it’s the Jeffersonian Lab, not the Jefferson, and it’s in Washington, not Newport News. It’s where Bones works.”

“Bones? What? No. We’re talking about the Thomas Jefferson National Accelerator Facility, an electron accelerator and theoretical physics center in Newport News.”

“No, it’s in Washington. And they’re crime fighter scientists- not whatever you said.”

“You do know that Bones is fictional, right?”

“It’s not fictional- it’s on television, on FOX.”

* This conversation didn’t actually happen, but, sadly, it could have…

Everybody ought to blog- right?